Tamers can fight enemies at any range. With the support of Heilang, the divine beast, Tamers can perform ruthless combination attacks with Heilang, or take the enemy down themselves while borrowing the divine force from the beast. After Awakening, they can use the Celestial Bo Staff to channel the divine power as the true master of Heilang.

Princess of the Fallen Kingdom

At the end of the Far Orient, there is an island full of beasts, almost devoid of human contact, called Haemo. A woman with a baby in her arms arrived at this island. However, she passed away not long after, leaving the baby to be discovered by a passing animal later. At first, it must have been pure curiosity about a creature it has never seen before. As the time goes, the animal grew fond of the baby's pure heart, and it was raising the baby with its own offsprings before it realized.

The baby grew to became a little girl when Hwisa, after completing a long journey, returned to the island with his companion beast, Heilang. Hwisa tried to find a right successor on his journey, but he came back to the island to relax after failing to find one. The sight of a little girl living with animals got Hwisa deeply interested, and he eventually took her as his student. Having lived with animals all her life, the little girl never got afraid of Heilang's threatening appearance, and soon became friends with it. She started absorbing Hwisa's teachings like a sponge.[1]

As she grew to become more human than an animal, the girl started questioning her identity and origin, which nobody knew about. Only one clue existed, however; the woman who was carrying the girl as a baby arrived on the Haemo Island. The girl's curiosity led her to step into the outside human world behind her teacher's knowledge.

It took the girl several years figuring out who she really is, and the result was not completely welcoming. She was standing right in the turmoil of a civil war. The entire royal family was slaughtered by rebels. One of the queen's handmaid managed to save a newborn princess and escape, and she reached the Haemo Island, a forbidden area, after running away from the chasers.[2]

Haemo Island was already swept in blood when the girl returned after learning about herself. It must have been because those in power had learned that the girl was alive and trying to learn about her past, traveling all over the country.

The girl grieved the death of Hwisa, her teacher, and held a funeral for him all the while realizing that she could not live in this country anymore. Before leaving, the girl left the "Celestial Bo Staff," her most prized possession, at Hwisa's grave. As she was about to get off the mountain foot, a fluffy dark shadow appeared in front of her. It was a baby of the late mother Heilang. It was still a frail baby, but the girl decided to take it with her on the journey, thinking it would still be better than being alone.

She headed west with the baby Heilang. The journey to the West was not smooth. She had to confront the Black Energy she remembered from the turmoil of the civil war, which led to the death of her beloved family and teacher. After nearly dying several times, the girl recalled what Hwisa said to her when she was younger: "The heaven-trembling power shall follow the true master of Heilang."[3] 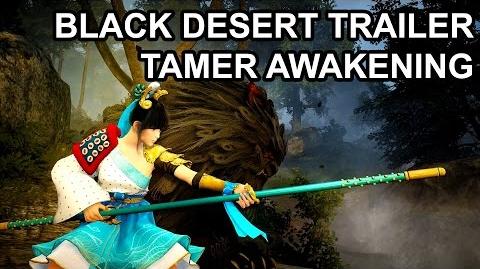