Margoria, also known as the Great Ocean,[1] is the name given to the vast ocean that takes up almost half of the total sea mass and appears to be situated between the main continent and Haso on both the east and the northwest directions. 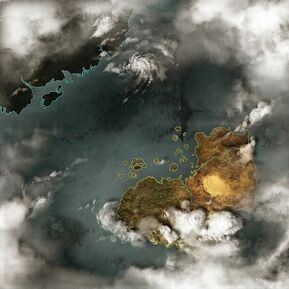 One enters Margoria throught the Ross Sea near the continent and the only current way of crossing it is going northwest until entering the Juur Sea that is near the Haso continent.[2] That is considered to be the shorter and harder route to Haso. It's said the long and easier route is throught eastern Valencia.[3]

Be prepared for unexpected obstacles in Margoria since compasses do not work and typhoons can get you anytime. Pirate ships and gigantic sea monsters are also major risk factors, although many guilds are after these monsters to earn some good money.[4]

Named after the goddess of the waves, Margoria.[5]

Remember, inside Margoria the world map, as in the desert, does not work.

You can use your mini-map as a compass, as long as the "Rotate Minimap" option under General Settings → Misc is turned off. The mini-map will show which direction you are facing, and you can then estimate your compass heading from that.

Valuable trade goods can occasionally be found floating in the water. These items will glow slightly, unlike the common flotsam found throughout the ocean.

Retrieved from "https://blackdesertonline.fandom.com/wiki/Margoria?oldid=19542"
Community content is available under CC-BY-SA unless otherwise noted.