Kamasylvia is the territory south of Calpheon. The ancestral homeland of all elves, it's composed of various kinds of forests, a giant steppe in the center-right and mountain ranges on the north and northwest, separating it from Calpheon, the east, separating it from Ordilita[1] and Drieghan, and the south where the Gyfin Rhasia Temple is located. An unexplored ocean borders it on all other directions.

Most of the territory is under the government of the Kama-Grána, the council that maintains law and order from the capital city, Grána, under the rule of the monarch. The current monarch is Queen Brolina.

Birth of Kamasylvia and the elves

According to elven mythology, before the recorded history, at the beginning of time, a holy tree settled its root at the highest place of the forest. The Goddess Sylvia came down with spirits of nature and gave the name of Kamasylve to the tree, and conceived life from the energy of the sun and moon. The land beneath the tree was soon called Kamasylvia.

The Goddess bore twins. The child that held the brightness of the sun was named Ganelle, and the child that held the darkness of the moon was called Vedir. After raising her twins the Goddess returned to the skies, leaving behind the holy tree in which she embedded her spirit. The twins established a prosperous civilization under the protection of the spirits and the holy tree.[2]

At some point in the past,[3] a large black meteor crashed in the Kabua Mountain on the northern edge of Kamasylvia, and the area around the crater was said to be destroyed. Because of the meteor, the formerly green forest surrounding the Kabua Mountain transformed. Because of the ash color of the woods and the thick fog blanketing the forest, the forest got the name, Ash Forest.[4]

The Disaster of Darkness

Around the year 235, an invasion of Dark Spirits occurred. It devastated parts of the forest reducing it to ashes. As the elves had no prior need for martial training, the role of protector of the realm resided solely with Kamasylve, the sacred tree. As the people of Kamasylvia searched for a way to help protect their homeland, a Vedir known as Josya Odore burned the essence of the holy tree in order to stop the invading Dark Spirits. It succeeded but left the Kamasylve so deeply wounded that it was driven into a deep slumber.

The Ganelle, who didn't know how to repel the invaders but didn't want to desecrate their sacred tree, grew angry towards the Vedir, resulting in tensions rising between them. Around this time a group specialized in martial combat was born, the Rangers.

Kamasylven Swords and the Civil War

One day, the elves devised a way to strengthen themselves. They took branches from the weakened Kamasylve and formed swords out of them. The new swords, imbued with the power of the spirits, proved to be great weapons in the struggle against the invaders.

The dispute between the two groups led to a civil war within the Rangers. This caused Kamasylve, the Sacred Tree, to awaken and witness the blood-swept land of the goddess. Expressing deep sorrow for the fierce conflict of its descendants over its power, the goddess-laden Kamasylve completely shut down all the power to its branches.

The Last Present from the Goddess

From then on, the Kamasylve decided to share its mysterious power only to the chosen ones in order to prepare itself for future invasions and to prevent future violent conflicts within the elven race.

The chosen ones to receive this gift from the Mother Goddess shall have an excellent grasp of martial arts, as well as strong physique and mentality.

Before going back to a long hibernation, the Kamasylve left the following message to its descendants:

"Only those who commune with the spirits and control themselves shall fully inherit the power of Kamasylve."[5]

The exile of the Ahib

While the civil war between factions had ended some time ago, tensions between them never disappeared. The Acher, the faction with the most support, controlled the land and imposed their will as law.

In the year 276 of the Elionian Calendar a new queen for Kamasylvia was chosen: Brolina Ornette.

Soon after the new queen had been crowned, the Dark Knights, one of the factions made up mostly of Vedir, decided to leave Kamasylvia and find a new land to live in while retaining their wish to, in their own way, protect the Kamasylve and their brethen.

On the day the Dark Knights disappeared from the history of Kamasylvia, the Acher moved against the Ahib, a Vedir-only faction. The Ahib were defeated and fled to the southeast. The Acher tried to exterminate them, but they were forced to retreat at the realm of the Ferocious Salun Bear.[6] The Ahib took a branch of the Kamasylve with them when they fled. They're using the trimmings to grow vines. The vines that the Ahib grow are weakening the power of Kamasylve.[7]

The awakening of the Kamasylve

In the year 283 the Kamasylve reawakened. Thanks to the power of the spirits from the forests of Kamasylvia and southern Calpheon, the Acher and Ranger were able to reawaken the sacred tree.

A year after, in 286, Queen Brolina Ornette opened the borders of the once secluded Kamasylvia and let people from Calpheon and Drieghan into it. 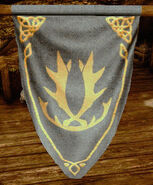 Add a photo to this gallery

Retrieved from "https://blackdesertonline.fandom.com/wiki/Kamasylvia?oldid=20743"
Community content is available under CC-BY-SA unless otherwise noted.