Elion is a god worshiped mainly in the Republic of Calpheon and his churches are found in most larger towns like Velia, Heidel City and the capital, Calpheon City. Its followers are called Elionians, and its religion, Elionism.

He seems to be a rather benevolent god according to tales of his followers, who ask to be filled with its light. His symbol accordingly depicts flames and his color is red - the reason why his "holy servants", the Valkyries, are expected to have red hair or dye it accordingly.

According to its followers Elion created the lands, plants and animals by using the Black Stones. Afterwards he created the intelligent races and founded a city between earth and heaven where overseers where located to watch over (and potentially control) the latter. Elion priests are actively out to mission followers and accept anyone willing to devote him or herself to their god. The Elionian religion knows the ideas of heresy and sin as well as repentance. It demands that any sinner be warned three times about committing these - before they are abandoned. Elion is depicted as the savior of the world.

The symbol of Elion can be seen on the Ossuary of Velia and many flags in Balenos, Serendia and Calpheon.

Interestingly there are slightly different versions of the Elionian symbol in the game. While the priests wear red and have the flames depicted with a T-shaped bar, the banners for Serendia show no flames and depict the symbol as a winged scepter on the Serendian colors of white and green. 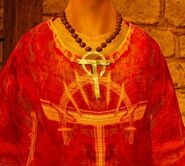 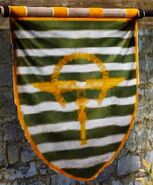 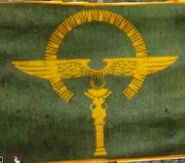 Add a photo to this gallery
Retrieved from "https://blackdesertonline.fandom.com/wiki/Elion?oldid=19858"
Community content is available under CC-BY-SA unless otherwise noted.