Balenos is one of the smallest territories in the game, north of Serendia and situated just south of the upper coastline.

It is the beginning area of the game, with many weak monsters scattered throughout the countryside. Despite this there are some areas which have powerful enemies that could easily kill a new player. Being so close to the coast, its major settlement and capital, Velia, is known as a farming village with connections to the sea which make it an ideal place for beginner fishermen. Balenos is also very abundant in resources such as horses, wood and farming goods.

Note: there are various events pertaining to the history of Balenos that haven't been clarified in the game. The following section tries to mention only facts.

At some point in time Cron Castle became the seat of an important state headed by Noir Bartali III, a kind king that was cruel only to aristocrats. With age Bartali III began to fear death and grew obsessed with the idea of immortality. Roughly 150 years ago[1] the Immortal Alchemist gave the king a scroll to summon Hadum, the God of Darkness, and obtain immortality. The king gladly accepted the scroll and offered all help he could get to make the summoning a success. It didn't work as intended and the castle blew up.[2]

There are various accounts about how many kings existed and in what order they ruled, but what is factually known is that a king named Bartali was called the founding king of Balenos and that another king called Bartali III was the last king of Balenos, a hero who prevented catastrophes using the Ramones, the guardians of Balenos in times of war or disaster.[3]

Even after the kingdom ceased to exist the Bartali family has continued to rule Balenos as chiefs of Olvia and Velia, the mainland towns of the territory.

The territory of Balenos played no active part in the war that led Calpheon to conquer its neighbors and surrendered without putting up a fight. It is currently under the rule of the Republic of Calpheon.

The republic sent a detachment of the Serendian Army under the leadership of Heidel's greatest commander, Cliff, to protect Balenos from the Biraghi Bandits and put an end to them. Roughly at the same time the Imps that had displaced the local Goblins from the Agris Steppe took up arms and started to fight dispatched force.

More recently Jordine Ducas, Grand Chamberlain of Heidel, sent Edan the explorer to find some ancient ruins located deep in the Forest of Seclusion. Jarette Domongatt, daughter of the Lord of Heidel, supervises the explorers from the Western Guard Camp.

There are also rumors about the descendants of Noir Bartali III having horrible nightmares about the Black Spirits and Cron Castle. 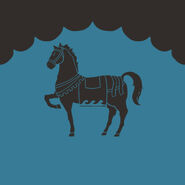 Add a photo to this gallery

Retrieved from "https://blackdesertonline.fandom.com/wiki/Balenos?oldid=19981"
Community content is available under CC-BY-SA unless otherwise noted.